The origin of Canberra's taxi industry can be traced back to the emergence of Canberra's local Hire car industry. Hire Cars existed in Canberra from about 1924 and for a period were actually registered as New South Wales Hire Cars.

The most notable of the old hire car operators were Horrie and Alice Cleaver who owned and operated H1 and H3 from the beginning until Horrie's son Bruce took over TX1 and Horrie sold TX3 in the late 1960's.

Mr Jim Kinnane, had a two way radio installed in H11 (it was at first thought that his was the first taxi or hire car in Australia to have been fitted with a two way radio, but it was later discovered that this honour belonged to a Melbourne vehicle).

In a short time Canberra Radio Hire Cars were formed and worked as a loose group. The twenty seven hire cars of the time worked from the owners' homes and from ranks in the City, Manuka and Kingston. The fares were set by the operators and were charged on the basis of a return trip (home to pick-up to destination to home or rank to pick-up etc). They were also permitted to pick up hails. They were not hire cars as we understand them today. They were called public hire cars; and once two–way radios were installed it was time to officially call them taxis. This also happened in 1956 [In 1933, Rex Morris, the owner of H 10 and H 40 had advertised his business as the Civic Taxi Service].

Many Deluxe owners had a long-time personal clientele (Prime Minister Curtin had been a regular client of Horrie Cleaver) whilst Black & White owners survived in a more competitive atmosphere. They operated under a set of rules which seemed to mean little to some of the members. Bookings were supposed to be pooled and dispatched to the closest car, but Rafferty's Rules were more respected.

Ken Lambert, his brother Bruce, brothers-in-law Jack McCarthy and Bill Dennis, Clem Sykes, Alec Vince and Rex Brodie decided there had to be a better way and in 1957 formed Aerial Taxis.

They were all owner-drivers, worked very long hours and were very dedicated. One of the strictest rules related to the pooling of bookings. They insisted on being seen as co-operative team.

Why "Aerial" Taxis? It was seen as a bit corny in 1957, but it worked. The group was encouraged by Stan Walker, the proprietor of the Ampol Service Station in Kootara Cres, Narrabundah. The members erected the antenna for their two-way radios at the rear of the service station and hence it became the Antenna Service Station; and as a vehicle with a two-way radio needed an aerial about one metre high to be installed on its roof, the taxis became "Aerial Taxis". A telephone sized booth at the service station was the dispatch centre. 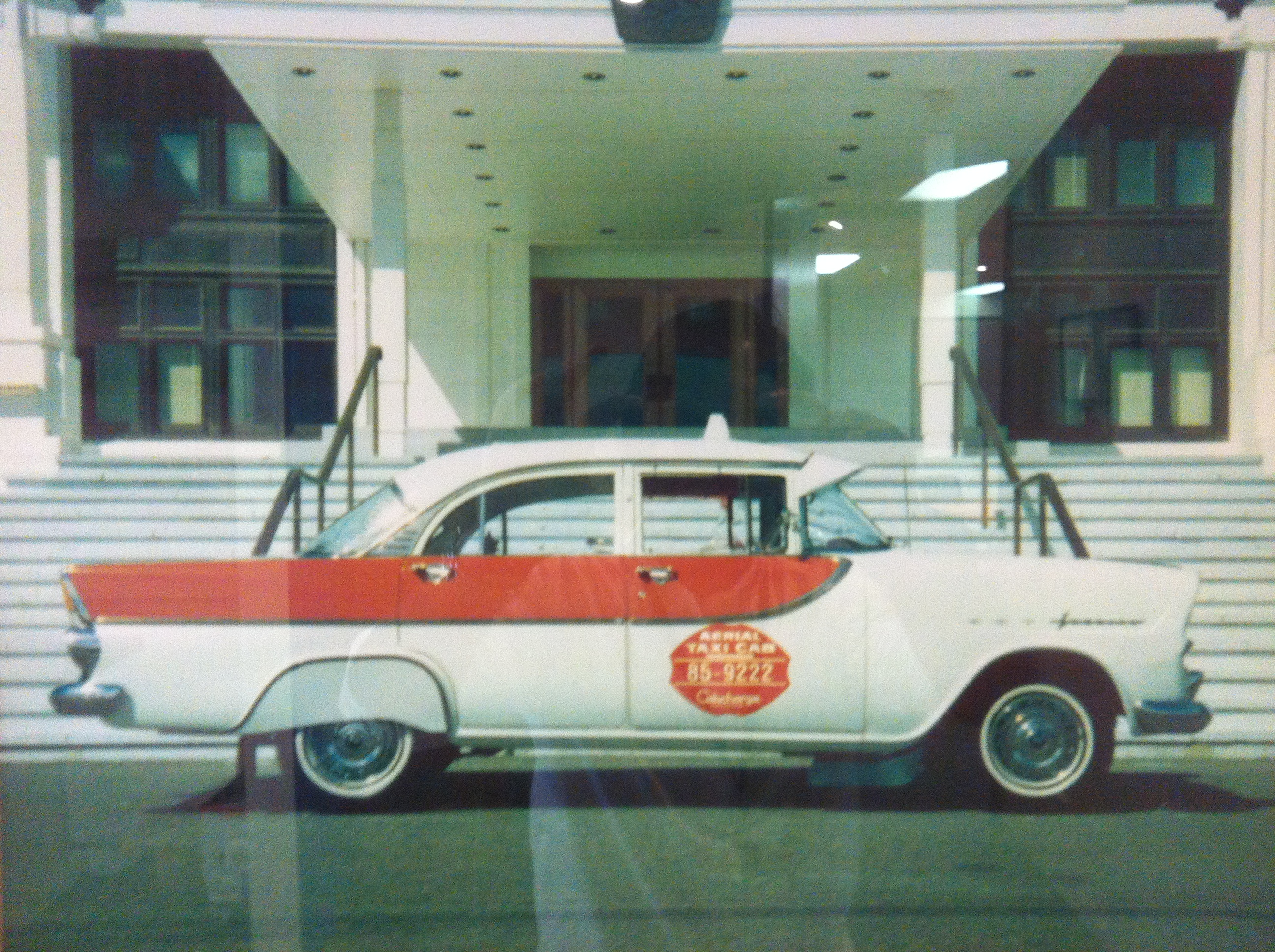 By the time the group became a co-operative in September 1959, the group had around twenty members. The only other surviving group was Deluxe.

The group soon outgrew the service station, although its relationship with Ampol ensured attractive petrol pricing deals for many years to come [In those days, to ensure compliance with an agreement made by the Board, members could be forced to buy certain products].

Base moved from Narrabundah to Manuka, to Green Square, Kingston, to 25 Lonsdale St, Braddon, to 1 Lonsdale St Braddon, to Lyons Place and then to its current location at 24 Kembla St, Fyshwick. 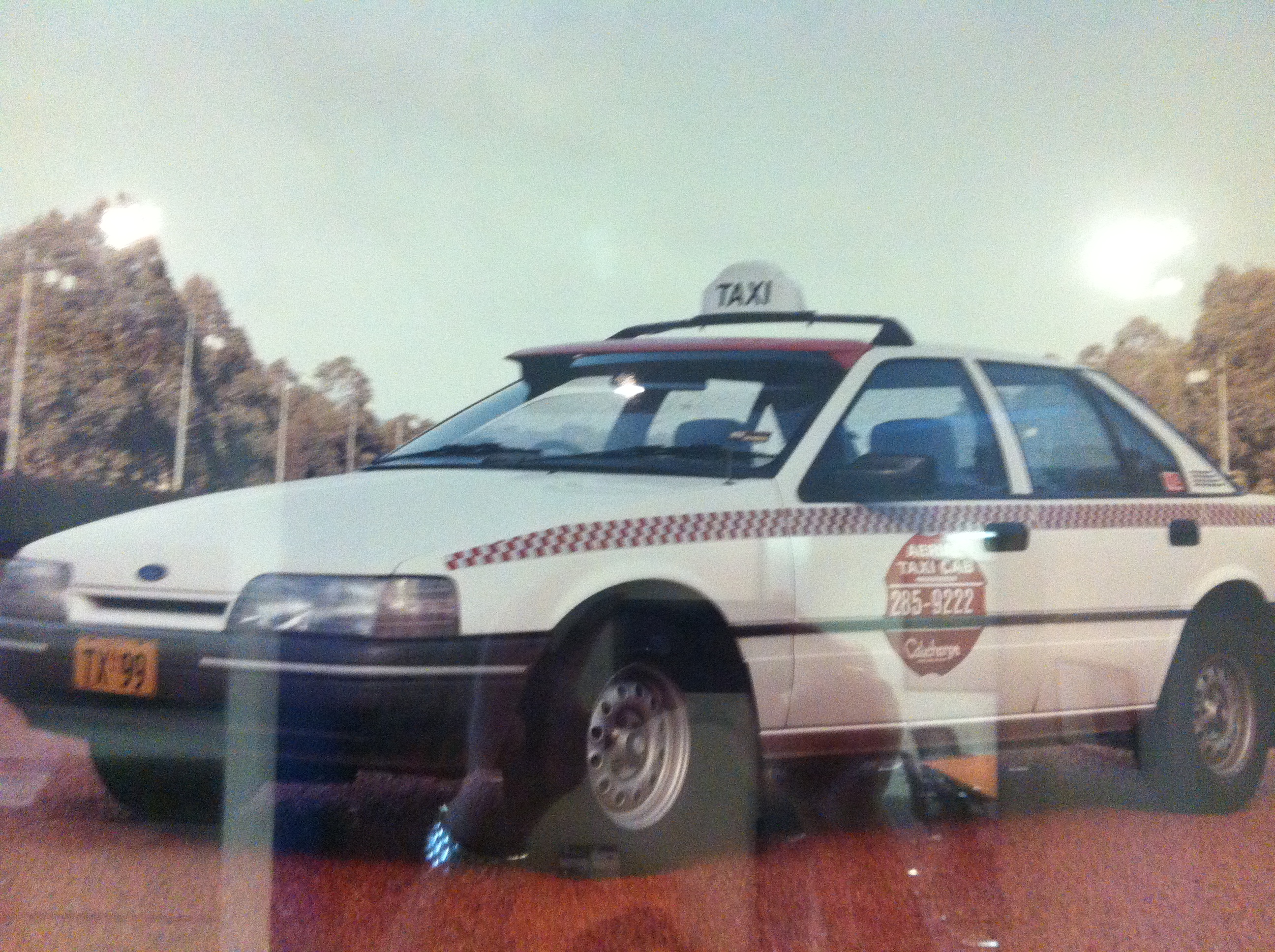 Aerial Taxis was aggressive and efficient, and in 1963 the only other remaining taxi group in Canberra, Deluxe Taxis, merged with Aerial. This brought Aerial's membership to forty-eight.

Between 1963 and 1965 another twelve taxi licences were issued by public ballot and all the new operators joined Aerial. At the time Canberra was growing rapidly and the service was often put under great strain. The result was the occasional outburst suggesting that Aerial was a monopoly and needed competition. The Department of the Interior asked Aerial to close its books to any new members so that those who drew licences in the next ballot would need to form their own radio group and work in opposition to Aerial. Reluctantly, Aerial agree and nine more plates were issued. Seven of these new owners formed a new group, ABC Taxis, while the remaining two decided to "work the ranks".

At the time the seven cars in ABC Taxis were supposed to form the competition for the sixty-one cars with Aerial. In actual fact the service deteriorated. Canberra was growing rapidly; seven cars had no chance of effectively covering a population of 80,000, and Aerial Taxis needed extra members in order to provide a decent service.

After about nine months, the department agreed to the amalgamation of ABC with Aerial; and a further nine licences were released between 1966 and 1968.

Between 1973 and 1975, twenty-five more licences were issued by a variety of methods: public ballot, ballot restricted to taxi drivers, and allocation to drivers.

In 1982, thirteen more licences were issued, and in 1983, twelve more, in 1985 twenty more and in 1987 another twenty were released, bringing Canberra's fleet to one hundred and sixty nine taxis and two "Multi-Cabs" vans fitted with special hoists enabling them to carry wheelchairs. The fleet has continued to grow and by April 1998 consisted of two hundred and seventeen taxis and six stretched sedans ("Multis").

At a special general meeting of Aerial Taxi Cabs Cooperative Society Limited on 26th May 1998, the members voted to change the trading name of the cooperative to Canberra Elite and to adopt a livery featuring the official Canberra colours. It was felt that the name and the colours would better reflect the desire for Canberra taxi owners and drivers to identify with, and serve Canberra.

The story of Aerial Taxis (Canberra Cabs) is virtually the history of the taxi industry in Canberra.

The other organisation is the Canberra Taxi Industry Association. The CTIA represents the industry in its dealings with the government, such as fare structure, positions of ranks, number of taxis, etc.